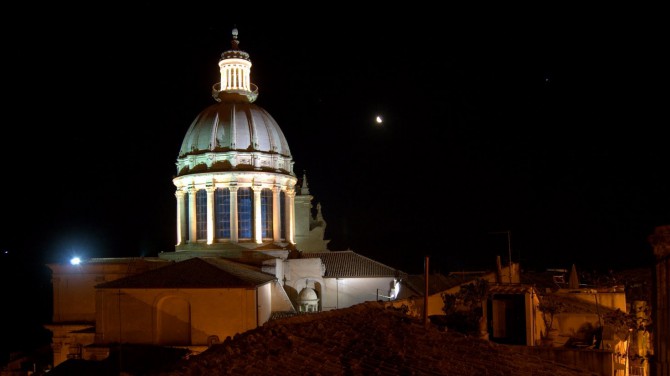 “Ragusa Ibla is exquisite. Perched on top of a hill above plunging valleys covered in lush vegetation of carob trees and prickly pears, it appears to have been carved out of the chalky, white limestone on which it sits”

Main information about the city

Ragusa, the provincial capital, appears on the southern slope of the Iblei Mountains, at an altitude of 502 metres above sea level. It has a population of around 72.000 inhabitants.

In 330 A.D., Ragusa passed under the Byzantine rule and remained as such for approximately five centuries: the Byzantine fortified the city. In the 9th century, Ragusa was conquered by the Arabs, who introduced, as they did to the whole of Sicily, a new and important form of cultivation. The Normans took control after the Saracens. They arrived in Sicily in 1060 and after a thirty-year period, succeeded in conquering the whole island. Ragusa became the County and was assigned by Ruggero I to his son, Goffredo, who became the first Count of Ragusa. In 1266 the Angevins, who a few years later were driven out with the revolt of the Vespers (1282), conquered Ragusa.

One of the richest events concerning the development of the County was to begin in 1452. The concession of land in emphyteusis was an agrarian contract that assured the holder of a section of land with the duty of working and improving it, upon payment of an annual fee in produce or money. The provisional concession passed straight to a lifetime contract and brought forth a radical transformation for local economics with consequent disruption for the feudal system and the birth of a strong class of farmers called “massari” (farmers). Two elements mark this period: farmers and dry walls.

The tragic 1693 earthquake destroyed the city. The present-day city is divided into two areas: Ragusa Ibla, the medieval town, with narrow and winding roads yet with eighteenth-century layout due to its almost total reconstruction after the dangerous earthquake in 1693, and Upper Ragusa, with its regular geometric layout.

The economy of the town hinges mainly on agriculture (horticulture, olives), farming, tourism, light manufacturing and small oilfields. Together with other seven cities in the Val di Noto, it is listed among the UNESCO World Heritage Sites.