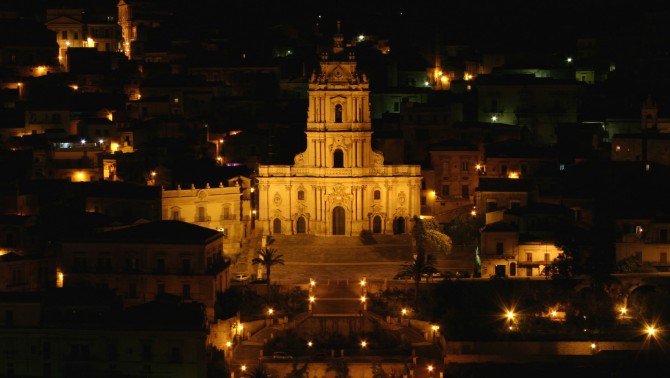 Modica… “a town in the shape of a pomegranate split open; near the sea but still a country town, half confined to a rocky spur, half spread out at the foot of the hills, with a thousand flights of steps like peacemakers between the two parts of the town, and clouds in the sky between one bell-tower and an-other”

Main information about the town

Modica has over 55.000 inhabitants and is set in the southern area of Iblei Mountains. It is approximately 10 km from Ragusa, the main town of the province. Chosen by the Sicanians and then by the Siculians for its particular position that made the site impregnable; the origins of the town date back to the Neolithic period, around 1400 BC.

Mid-7th century BC the Greeks first came. In Roman times it was a “decuman” town, together with nearby Ibla. In 827 the Muslims began to conquer Sicily; Modica was taken by force in 844-45. During their two century of domination, the town improved its agricultural and commercial importance. Then, in 1091, it was conquered by Ruggero d’Altavilla and began its history: the history of the County of Modica. With the Swabian conquest of Sicily, Modica was seized as State property, to be successively granted to the Mosca family. Under the Aragonese domination, the Mosca family reconfirmed the investiture, and in 1296, following the marriage between Isabella Mosca and Manfredi Chiaramonte, the County passed to the Chiaramonte family and remained theirs for almost a century. This period was, without doubt, the most splendid of all of its history. In less than a century, churches, monasteries, buildings and castles were built. In 1392, the Chiaramonte family was succeeded by the Cabrera family.

In 1474, Modica was the setting for a horrible crime, based on the teachings of racism. 360 victims Jewish people were killed, guilty of being of the Hebrew race.

In 1480, the County passed to the Henriquez family, by virtue of a marriage to a Cabrera family member. The Henriquez family held the title up until 1702 when Giovanni Tommaso Heriquez Cabrera committed high treason and the title was confiscated as real State property. In 1860 it was incorporated into the Italian Kingdom.

The structure of the modern-day town can be summarized in three areas: Modica Alta (Upper Modica) whose buildings are almost climbing the mountain rocks; Modica Bassa (Lower Modica) is located down in the valley, where the two rivers, Ianni Mauro and Pozzo dei Pruni, once flowed. Owing to numerous floods, the beds of the two rivers were covered giving birth to two beautiful streets; Corso Umberto, the main street, is one of these. Modica Sorda, the new part of the town is prevalently known for its many commercial activities.

The predominant architectural style of the old part of the town is late Baroque style dating back to the XVII century (after the earthquake).

The town is surrounded by a beautiful countryside marked by its typical “dry stone walls”.

The economy of the area is mainly based on the production of olives, carobs, legumes, cereals, and cattle; an extraordinary and unique product is the famous chocolate of Modica, produced with an ancient and original Aztec recipe. Tourism is also important industry to the area. Modica is now part of UNESCO World Heritage Site since 2002.