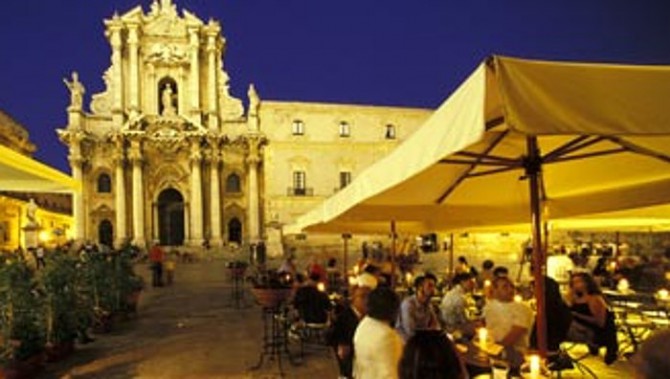 Two of the Italian island’s restaurants have won Michelin stars, but who says posh is best?

I am not generally a fan of Michelin-starred restaurants.

It’s not that I have a problem with the guide per se, more that satisfying the demands of a guidebook originally designed to tell haute-bourgeoisie French motor-ists where to find Parisian-style fine dining seems to do strange things to chefs, making them complicit in a production-line approach that, however upmarket, has more in common with the box-ticking of Pizza Hut or Starbucks than with good cooking.
From the type of glassware to the number of amuse-gueules, there is a Michelin way of doing things that often seems to stifle rather than celebrate regional idiosyncrasy.

But when I heard that in the southeastern corner of Sicily there were two Michelin-starred restaurants, in towns 50 miles apart, each set up by local chefs after years honing their craft elsewhere, my interest was piqued.
How would they reconcile the elegant formality of Michelin with the more relaxed attitudes of the Mediterranean? Which establishment would do it better? So it was that I found myself heading to the coastal backwater of Licata, where Pino Cuttaia owns La Madia, voted best restaurant in Sicily 2008 by Cronache di Gusto and a personal favourite of the editor of the Gambero Rosso guide.

Described as “an island within an island” by the writer Gesualdo Bufalino, this region is Sicily’s larder. Groves of orange trees and almonds line the road, verges are bright with crimson bougain-villea and fields of wheat stir in the warm winds.

Almost every rural building seems abandoned. This is earthquake country, and one earthquake in particular shaped it, when a huge tremor in 1693 flattened more than 100 towns. Undaunted, the local aristocracy rebuilt them in the style of the time, an elaborate confection of carved stonework known as Noto baroque – an extraordinary feat of reconstruction that included building 600 churches and countless palaces and other structures, all within the space of 50 years.

It is a different kind of history that shaped the local cuisine. Like many islands, Sicily is a melting pot, each wave of invaders adding to the culinary mix. The Greeks brought wine, the Romans pasta, the Spanish prickly pears and chocolate, and the French brought chefs. (Monsu, the local word for chef, is a derivation of monsieur.) But it was the Arabs who had the greatest influence, introducing spices such as cinnamon and sesame, sweet-and-sour combinations of raisins and vinegar, and fruits such as pomegranates, together with couscous and other Eastern dishes.

“Scratch a Sicilian and you’ll find a Saracen,” runs an old proverb, and the dry, peppery wind here reminds one constantly that in this part of Sicily you can actually be south of Tunis.

After negotiating Licata’s sleepy streets, we settled ourselves in a pleasant, airy room, where we were – inevitably – served the first of many amuse-gueules, a deconstructed pasta alla Norma, named after Bellini’s opera. A mousse of aubergine – yes, even in Sicily there seems to be an unwritten rule that you don’t get a Michelin star unless you proffer at least three froths, foams and other forms of flavoured air during a meal; perhaps it is something to do with the guide’s antecedents as a purveyor of pneumatic products – sat atop a swirl of spaghetti and a thick tomato sauce. The flavours were simple and strong. We heaved a sigh of relief.

This was authentic local cooking, imaginatively reinvented – an impression only slightly spoilt when the waiter brought a dish of salt and reverently informed us that it was a sex salt, from modern England. It turned out he meant Essex, and Maldon – indisputably good, but a shame when the salt flats in nearby Mothya are endangered due to lack of demand.

Highlights of the meal included smoked merluzzo (cod) with pine nuts, and couscous with gamberone. These huge shrimp, the colour of blood oranges and almost as sweet, are one of Sicily’s great delicacies.

The next day, we headed inland to Ragusa, and Ristorante Duomo. Although almost as young as his rival, chef Ciccio Sultano has already garnered two stars to Cuttaia’s one, and it shows in the number of tasting options vying for attention on his menu. The amuse-gueule here was a truffle gelato – ice cream being another local invention, created by Arabs who combined snow from Mount Etna with rose-water and jasmine. This one was served in a sandwich of salted toast. It sounds complicated but was delicious and inventive, as were the dishes that followed it: salami of goat with wild vegetables, an antipasto of octopus, and black pork in chocolate sauce. On the basis of these two meals, the guide’s inspectors have got it right: Duomo has the edge.

I also wanted to see how these meals compared with the more down-to-earth restaurants of the area. The next day, we visited the small town of Chiaramonte Gulfi, dramatically perched on the side of a mountain. An outer ring of grotty, jerry-built apartment blocks suddenly revealed a centre that was all baroque – tiny cobbled streets topped by extravagances in wheat-coloured stone. Just behind the cathedral was a butcher’s shop called Majore. The door was locked. After a few minutes, someone walked up the street and asked if we wanted some lunch. When we agreed we did, he took us through a side door into the back of the shop, where there were a few tables.

Majore’s motto is “Quì si magnifica il porco” – “Here the pig is glorified” – and you soon see why. An antipasto of pork brisket, complete with porky gelatine, was followed by risotto with a porkragù, and ravioli filled with, you guessed it, more pork. For asecondo, we were brought a single pork chop, which the waiter cut open to reveal that it was stuffed with pork offal. It was a great meal, gutsy in every sense of the word. With a bottle of spicy, perfumed nero d’avola, the bill for two came to £24 – less than some of the main courses at Duomo.

From there we continued on to Syracuse. This ancient Greek port is where Archimedes once cried “Eureka”. Like visitors today, he would have eaten plenty of pesce spada (swordfish), fished here in staggering abundance – apparently, the gap between Sicily and the mainland acts as a sort of natural funnel, herding them towards the fishing grounds as it narrows.

Ristorante L’Ancora, near the market, was as down to earth as it gets – there was a television showing a football match, a few customers were defying the no-smoking signs, and some of the ingredients for our meal were not only still alive but crawling, wriggling and flapping around the cash desk. A stream of people wandered in and out of the kitchen, or helped themselves to bottles of wine from the fridges lining the walls, settling up with Giancarlo, the proprietor, later. We were given neonati, tiny newborn fish, served with chilli, mint and chunks of blood orange; octopus in fruity olive oil; and whelks as big as baby conches. And that was just the antipasto. It was followed by an excellent pasta with a sauce of swordfish eggs, tomatoes and wild fennel stalks, as pungent as any bouillabaisse.

In fact, Syracuse turned out to be full of great, straightforward places to eat. Typical of these was a restaurant called Il Cenacolo. In a pretty, medieval piazza, tables were spread out under palm trees. Children were eating pizza; families were passing around tender cuts of swordfish belly that had been grilled over an open flame. As the level in our bottle of white wine sank along with the sun, I had my own, small eureka moment. It was all a far cry from our meals in Licata and Ragusa, but somehow, good though those had been, much more enjoyable. With food like this on your plate, and the moon above your head, who needs stars?