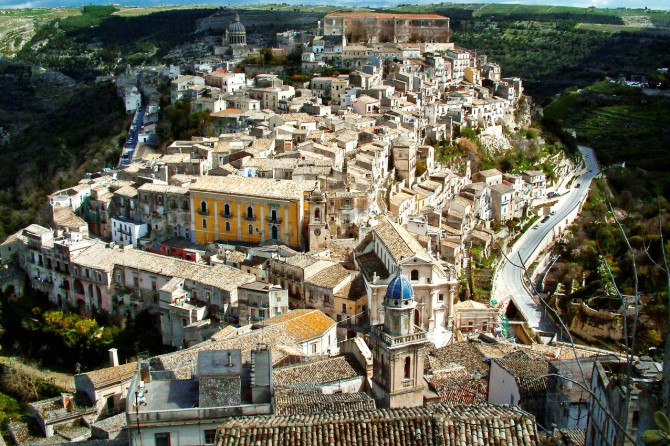 A glorious spring sun beats down on my back as I climb the steep limestone steps of Ragusa’s old town, Ragusa Ibla. It’s only March but it feels like summer.

“Are you ready to taste some wine and cheese,” my guide, local food-and-art-expert Barbara Sudano, asks as we arrive at 17th-century Palazzo Arezzo di Trifiletti, in Piazza Duomo. You bet. I’ve come to Ragusa, Sicily’s unsung foodie mecca, hungry, planning a non-stop gorge-fest of the small-time products and world-class cuisine the region’s known for. Eyeing Barbara’s itinerary on top of the dinners I’ve booked, I’ll be rolling myself back on the plane, no doubt. 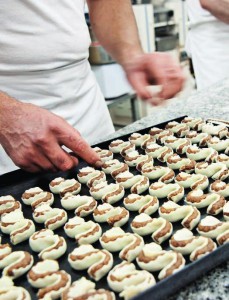 The tour kicks off inside the palazzo, where Peppe Lizzio awaits. Peppe’s specialty food shop, Isola nell’Isola, stocks gourmet cheeses, biscuits and wines, and on request he’ll host tastings at the Palace. Today he pours out a red Romolo Buccellato and talks us through his spread of pistachio cookies and sesame breads.

Pleasantly satisfied after our morning snack (of items I’d normally devour after 5pm), we drive through Ragusa’s pretty Val Di Noto to UNESCO-protected Scicli. Word is that chef Rita Russotto may be the best new thing in the region’s cuisine and we’ve got a lunch booking at her new restaurant Satra. The menu speaks to the island’s diverse produce, and she starts us off with cuttlefish and ricotta arancini before wonderfully fresh fresh couscous, a nod to the Arab influence in Sicilian cooking. Belly bulging, I almost pass on dessert, but who says no to saffron and fennel ice cream? “That’s it,” I announce, bowl licked clean, “I’m full.” Barbara won’t have it. She says next stop is Modica, a town known for its fine Baroque architecture and chocolate. We fill our faces at Modica’s prized confectioner Antica Dolceria Bonajuto, before Barbara drops me back in Ibla. 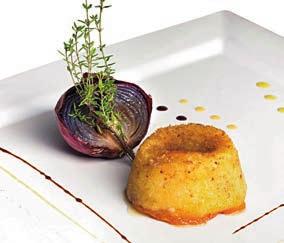 I walk off the chocolate around the old town before dinner at two-Michelin starred Locanda Don Serafino. It’s been the gold standard of Ragusa cuisine since 1953, and after my meal – slow cooked Nebrodis pork belly, squid-ink pasta – I can see why.

But Locanda’s not the only two-starred spot in Ibla and I figure its only fair I try both. So the next night I head for Ristorante Duomo to sample chef Ciccio Sultano’s note-perfect gnocchi with Ragusano DOP cheese, and pork meatballs with shellfish. And there’s still more. My last supper is in the country, at the luxury Eremo della Giubiliana resort whose in-house restaurant, I’ve been told, is fabulous. And if my octopus salad is anything to go by, Ragusa will be adding another star to its Michelin count soon.